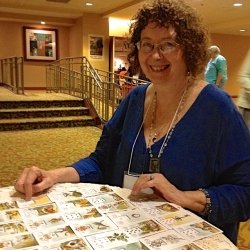 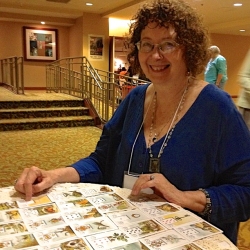 Are you a Tarot reader wanting to ride the Petit Lenormand wave but not sure how to navigate these two very different card systems? Who better to learn from than internationally renowned Tarot author, reader and teacher, Mary K. Greer who confesses to  giving herself over to a ‘complete Lenormand obsession’ about three years ago! The five classes in Mary’s course on reading the Petit Lenormand cards received rave reviews from people who were in the recording sessions and those who have subsequently bought the recordings.

In this post Mary talks with me about the differences between the two card systems and about the way she designed her course so that you can quickly and confidently begin reading the Petit Lenormand cards. We continue the conversation in the next post where Mary talks about the origins of the two systems and why she thinks there’s been such a groundswell of interest in the Petit Lenormand cards in recent years.
LINDA: What are the main differences between reading Tarot and reading the Lenormand cards?
MARY: Reader Stella Waldvogel, described Tarot as visual (image-based) and Lenormand as verbal (keyword-based). This makes a succinct point, although I think it is more nuanced than that.

Essentially, Tarot is symbolic, with multi-dimensional meanings attached to pre-existing Renaissance allegorical images. All evidence says it was created for card games, not divination. The 22 Major Arcana refer to philosophical qualities and virtues such as secular and religious leadership, justice, courage, sacrifice, evil, triumph. Even the tiniest details can be interpreted in infinite, multi-valenced ways. While the Minor Arcana can be used like regular playing cards, lending themselves to mundane questions, the Major Arcana, tend toward the more philosophical, psychological and mythic or archetypal.

Lenormand is emblematic, representative of particular ideas. Each card has a fairly narrow and specific range of practical meanings—the same found in 18th century coffee-ground divination. They include everyday occurrences regarding news and mail, travel, home, rivalry, money, illness, longevity, betrayal, thievery, friendship, etc. The core meanings lead to succinct, pragmatic and accurate descriptions and predictions, although some individuals look for more philosophical or psychological meanings.

Jean Redman says Tarot lends itself to the esoteric—interior and philosophical—and Lenormand to the exoteric—external and pragmatic—although readers cross these lines all the time.

Any set of pictorial images like Tarot and Lenormand may, of course, be used as a focus for a psychic reading or suggest an unlimited range of omens and oracles that have nothing to do with the standard meanings. What is sacrificed is the cohesion of a unified set of references.
LINDA: What are the main challenges Tarot readers face when they start to learn the Lenormand system?
MARY: Lenormand consists of two things: 1) a set of cards and 2) a system of reading that has been likened to a language with its own vocabulary, grammar and structure, with regional ‘dialects’ or variations. First you need to learn the vocabulary: involving noun, adjective and verb keywords for each card. Then you learn how to combine cards into meaningful units.

Dog, by itself, can mean a friend or loyalty, but you need other cards to tell you what kind of friend or loyal to what. Next to a negative card it might point to betrayal by a friend or disloyalty. Next to Tree (health and illness) Dog might refer to a doctor.

Spreads rarely have position meanings; rather sequences of cards form sentences. The most traditional spread, called the Grand Tableau, uses all 36 cards; it takes a while to learn how to navigate it. Shorter spreads  were probably developed originally as ways to practice segments of the Grand Tableau. Positional spreads, like those in Tarot, are rarely used.

In my opinion, the best readers draw deeply from the tradition. They have what is called a learned intuition, benefiting from ‘rules of thumb’, which is far more accurate than just intuition alone. So, the challenge is to learn the system, its cohesiveness, and its benefits rather than making up one’s own. I feel Lenormand uses different kinds of mental processes than Tarot, so it takes patience and commitment but it’s also incredibly stimulating and enlightening.
LINDA: What are the advantages to doing your Lenormand course as opposed to using books to learn the system?
MARY: I’m glad you asked that. People today have access to so many ways to learn, but this course is about YOU. The aim is to build your skills. Each new piece of information adds onto an earlier foundation or level. You learn a piece and practise it, and then add the next piece and the understanding that goes with it. It doesn’t take long before you realise you’ve just read the whole thing!

The course also focuses on themes among the cards, which I see as the best way to learn their true significance. Handouts convey the core keywords, so in class we can explore the nuances among cards, seeing how they help define and develop an issue. For instance, what are all the cards that deal with work and money? How are they similar and how are they different? What is each doing in a Grand Tableau? Or, what cards refer to the most important people in our lives and how do we know who is who?

A fun way to explore the differences yourself

LINDA: Do you use both Tarot and Lenormand when you do readings for clients?
MARY: Sometimes. Some questions immediately lend themselves to one or the other. A short Lenormand spread can quickly clear up practical questions and concerns left after an in-depth Tarot spread, like, ‘But will the money come through on time?’ Lenormand handles most yes/no questions with ease, describes events and suggests where there will be difficulties and successes in the near future. It is not as good at values-clarification or determining soul lessons to be learned (but never sell one or the other tool short). You can lay a card from one deck to help clarify a card in another, or create a spread that uses both decks in different positions.

An example of the difference can be seen in this process: before going to a play or movie, draw cards that help you focus on things to which you should pay special attention. I usually deal a line of five Lenormand cards to describe the plot of the story. The cards can also be used to describe physical and personality characteristics. Then I lay out cards from the Tarot into positions representing the central conflict and theme of the story and the motivations and needs of the main characters. This simple division epitomizes to me how the cards work best. You’ll find a couple of examples on my blog, for instance: https://marygreer.wordpress.com/2013/07/22/whos-afraid-of-virginia-woolf/ . 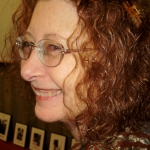 Mary K. Greer has been practising Tarot for more than 46 years and teaches Tarot around the world. The award-winning author of eleven books on tarot and on magic, Mary is a member of several national and international tarot organizations and is featured at tarot conferences around the world. Her classic, Tarot for Your Self, came out in a beautiful Japanese edition in 2012.

In 2007, she received the International Tarot Lifetime Achievement Award from the Association for Tarot Studies. As an independent scholar, writer, teacher, and professional tarot consultant, Mary sees herself as a ‘midwife of the soul.’ She advocates using card reading techniques that are interactive, transformational and empowering and takes a revolutionary approach to teaching that emphasizes personal insight, creativity, and breaking all the rules. Click here to visit Mary’s website.

Over to you for questions and comments

PrevNextTurning a bright idea into a business reality with Linda Marson
PreviousThe rise and rise of the Petit Lenormand deck with Mary K. GreerNext